How Unison Helped a Father Rescue His Personal Finances

Anyone who is a parent understands the desire to see his or her children make the most of their lives. One of your biggest goals is to see them thrive. Sometimes, mothers and fathers will even sacrifice their own health, safety, or finances to protect their kids and ensure their future is bright.

That’s the situation a Unison Credit Union member found himself in after helping his two daughters pay for their educations. Member Advisor and Unison Lending Manager, Kathy Vanden Hogen, told us the story of a dad who put tens-of-thousands of dollars on credit cards to finance the cost of college, and how Unison helped him find a solution.

This father did not originally visit Unison with plans to ask for help with his credit card debt. Kathy says he came in to get approved for a truck loan. That’s when she noticed something wasn’t right. While his credit score was fine, his debt-to-income ratio (DTI) was preventing him from getting approval. 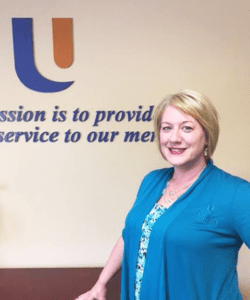 He admitted that he’d used credit cards to make tuition payments, cover the cost of college textbooks, and to get cash to send his kids when they needed it.

Kathy suggested that he consider using the equity he’d built up in his home to eliminate the credit card debt. However, he was staunchly opposed to the idea, which complicated his situation.

“He wanted to sell his home and downsize in the next five years, and he didn’t want to lose the equity,” Kathy explains. “So, part of our conversation was, if you don’t qualify for a truck loan, you’re not going to qualify for a home loan with all that credit card debt out there.”

Kathy told the member to go home and look over his credit card statements. He needed a clearer picture of the situation, including all his minimum payments, interest rates, and how long it would take to pay off the full balance of the debt.

“He came back to see me three days later and asked, ‘How can we do this?’” Kathy says.

On that second visit to see Kathy at Unison, the father revealed he had amassed around $77,000 in credit card debt.

“His payments were astronomical,” says Kathy.

Interest rates ranged from 8.99% to 33% due to a cash advance. In order to make the minimum payments on all of those cards, he was paying more than $1,000 every month. That’s on top of a mortgage, vehicle payment, and the everyday costs of living.

“He kept telling me how stretched his family was,” Kathy recalls. “With credit card debt like that, I could understand. He had three different bills due each week, and he was always trying to figure out where to get the money to make those minimum payments.”

Kathy eventually convinced the father that using the equity he’d built up in his home was the best option for getting things under control.

The family refinanced and took out a new mortgage with Unison, using the funds they acquired to pay off all $77,000 in credit card debt. That put the debt and mortgage into one manageable monthly payment of less than $900.

“Plus, Unison has no pre-payment penalties,” Kathy explains. “We talked about taking some of the extra money he was no longer putting towards the credit cards and saving it in case something else came up. But, if he wants, he can make a higher payment each month to build back the equity in his home sooner.”

Thanks to Kathy’s plan, he was even able to get the truck loan he originally came to see her about.

“He also qualified for a lower rate on his truck loan because his debt-to-income ratio was within means,” she adds.

Although he was initially reluctant to use his home as a financing solution, making his debt easier to manage and getting his personal finances under control was a huge relief to this Unison member. Kathy says she completely understands why he found himself in such a tough situation.

“He was trying to help his kids out; you can’t fault him for that. He kept saying, ‘I don’t want them to graduate from college with debt.’ I get where he was coming from and his heart was in the right place.”

How Unison Member Advisors Empower You

While this member’s story may seem extreme, Kathy says it’s not uncommon. Debt gets spread out on multiple cards, and suddenly, it’s extremely difficult to control. When it comes to your personal finances, it’s important to look at the big picture.

“When there are so many different bills with smaller minimum payments, I think many people fail to realize what it’s really costing them in the long run. That’s why we always encourage them to look at their credit card statements closely.”

Kathy also warns that credit cards are not the right way to pay for college. She says that this member would have been wise to consider a home equity line of credit (HELOC).

“With a HELOC you only make monthly payments on what you have borrowed, and credit cards will have higher interest rates in comparison,” she says.

Now is the Time for a College Savings Plan

For younger parents who have time to put away money for a child’s education, Unison recommends a plan known as the Coverdell Education Savings Account (ESA). This type of savings account allows you to grow savings tax-free until the funds are distributed. Plus, a Coverdell ESA can also be used to pay for elementary and high school education expenses.

The rising cost of college is something many families are dealing with. The College Board reports that the average cost for a “moderate college budget” is more than $24,000 a year for an in-state public college and more than $49,000 a year for a private university. That includes tuition, fees, books, housing, and meals.

Here in Wisconsin, the UW System says the average cost of attending college is $18,890 for the 2016-2017 academic year. If having children attend college is part of your family’s plan, the sooner you start thinking about how to pay for it the better.

When you have questions about personal finances, don’t hesitate to stop in at any Unison Credit Union branch and talk to our helpful Member Advisors. We have locations in Kaukauna, Wrightstown, Little Chute, Grand Chute, and De Pere.

Whether it’s a question about saving for the future, information on getting approved for a loan, or advice on consolidating debt, we are here to help. It can be difficult to admit when you’ve made financial mistakes, but Unison Credit Union is a financial institution you can trust to treat you with respect.

“Our attitude is that what’s done is done. There’s no judgement,” Kathy says. “Unison Member Advisors will always work to put you in a better spot financially. We’ll never make your situation worse.”

Any specific references to commercial products, trademarks, service marks, manufacturers, or otherwise in this article do not constitute or imply endorsement by Unison Credit Union.